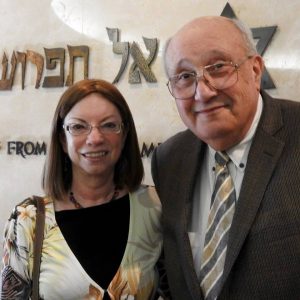 Ed and Esther Beck’s commitment to the Harrisburg Jewish community goes back more than 45 years.

After arriving in Harrisburg, they quickly got involved in all types of programming. Ed, a professional counselor during his career, had his first official role in the community as Vice President of Jewish Family Service in the early 1970s.

“I think JFS provides a very important service to the Jewish community,” he says. “Jews are not immune from social and personal issues which frequently complicate our daily lives.”

As a couple, they have found their niche in the Harrisburg Jewish community by connecting and participating with many groups, agencies, and synagogues. The Becks see the Legacy program as a way of giving back to a community that has meant so much to them over the years and insuring  it will be there for others in the future. As they learned more about the program and considered the organizations that were important to them, it became clear that they wanted to support JFS as part of their legacy.

”We were particularly grateful to JFS, who provided Kosher Meals on Wheels for my mother, a Holocaust survivor, during times when we were consumed with work and couldn’t always get her a meal in a timely fashion,” Esther recalled.

The Becks feel that JFS, in particular, is an organization that is uniquely committed to serving all in our area. “A lot of what they do, helps the general community, but with Jewish values. It sends an important message that we’re here for you.”

The Becks implore others in the community to participate in the Legacy program. “We think the Legacy Program helps insure the future of these important services for those who follow.”

Please join the Becks in leaving a legacy gift to JFS through your will, trust, retirement account or life insurance policy.  Thank you to the Jewish Community Foundation for coordinating this important initiative on behalf of our community.