By Mary Klaus (originally published in 3.13.2020 edition of Community Review) 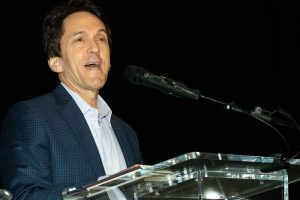 Although Mitch Albom wasn’t in Haiti for the 2010 earthquake, it jolted his heart forever, he told more than 400 people in the Beth El Temple sanctuary.

Albom, best-selling author, sports writer, and humanitarian, gave a moving program about his latest book, Finding Chika: A Little Girl, An Earthquake and the Making of a Family, during a program presented by Jewish Family Service.

Chika was an orphaned Haitian girl whom Albom and his wife took into their home for two years until she died from a brain tumor.

“Mitch Albom is a walking billboard for what we do,” said Barry Stein, Jewish Family Service executive director. “He and his wife took a child under their wings and gave her a home. We promote the same things.”

Albom spoke against a backdrop of blue curtains. He used music and video to show both the poverty of Haiti and the high spirits of the little girl he came to love.

After Chika and her mother lost their home, they spent the next six weeks sleeping in a sugar cane field. A world away in Detroit, Albom watched reports of the earthquake. He felt called to help and joined other volunteers heading to Haiti.

“Buildings were in piles of rubble, looking like they had been put through a shredder,” he said. “There was a stench of bodies and chaos everywhere. Suddenly, I felt two little hands in mine. A boy and a girl took me into their world.”

A decade later, he’s still part of that world.

Albom and a group of helpers went to Haiti nine times, rebuilding the Have Faith Haiti Orphanage in Port-Au-Prince. When he saw children starving there, living on one cup of rice a day, he agreed to run the orphanage. Ten years later, the rebuilt orphanage provides home and schooling to 52 children, who all have college scholarships awaiting them.

“Two years after the earthquake, Chika’s mother died in childbirth,” Albom said. “Chika lived with her godmother a short time, then was brought to the orphanage.” The youngest child in the orphanage soon became one of the most loved children there.

When Chika was five, she developed neurological symptoms. An MRI at the only such machine in Haiti revealed that she had a mass on her brain. Haiti didn’t have any doctors able to help her so Albom stepped in.

“We scrambled to get a birth certificate and passport for her,” he said. “Then my wife, Janine, and I took her to a hospital in Michigan for surgery.”

Her surgeon told the Alboms that Chika had diffuse intrinsic pontine glioma (DIPG), a rare, aggressive, and fatal form of childhood brain cancer in the brain stem. He estimated that Chika had four months to live and recommended that Albom return the little girl to her homeland.

“I said ‘No, we aren’t taking her back to Haiti,’ Albom recalled. “We brought her to live with us as we looked for a cure for the incurable. We became a family along the way, two people for 25 years who became three people. She didn’t look like my wife and me, but she couldn’t have been more of a daughter to us.”

The Alboms were in their mid-50s when they took Chika into their homes and hearts. While under their care, she had three brain surgeries. They took her to medical treatments both in the United States and Germany but found no cure. Along the way, they taught her English (her third language). She, in turn, taught them life lessons.

“Chika taught us that you’re never too old to become a family,” he said. “She taught us that time is different to a five year old and some things take ten times longer.”

She also showed a sense of wonder about everything from highways to television. When they took her to Disneyland, Chika marveled at a duck waddling toward her. Albom smiled tenderly as he showed video of Chika dancing, singing, praying, bowling, sledding, and living life to the fullest.

“She taught us how tough children really are,” he said. “Kid tough is different than adult tough. Kids can adjust in the pain and find the play in the work. Chika always managed to find the laugh. She also taught us to appreciate happiness at every single moment no matter what the adversity.

Chika loved to sing, especially “Do-Re-Mi” her variation of a song from The Sound of Music or “Tomorrow” from the musical Annie. Albom showed videos of him trying to sing with her only to have her put her hand over his mouth.

“Chika also taught me about my marriage,” Albom said. “She showed me that when you have a child, you don’t lost your spouse. You just see another side of her. She and Janine used to sing ‘Over the Rainbow.’ Janine seemed to have waited her whole life to take care of Chika.”

Finally, Albom said, Chika taught him what’s important. Toward the end of her life, he said, she developed “an other-worldly sense. She sometimes communicated with something bigger.” He recalled hearing her softly singing “I’m a Child of God” one night.

“When she lost the ability to walk, I would carry her,” he said. “She told me that playing was her job and carrying her was my job. No truer words ever were spoken. Carrying her was the best job I ever had. Our job is to carry our children through the good and difficult times. We are defined by what we carry.”

His voice dropped as he described the “beautiful April day” that Chika died with Albom on one side of her and his wife on the other. They counted down her final breath, felt her last heartbeat, and received her final lesson, the knowledge of “what a magnificent blessing it is to be alive.”

“Chika lived seven beautiful, amazing, and impactful years,” Albom said. “She changed us and everyone she came in contact with. Now, her brother lives with us.”

As Albom writes in Chika’s story “A child is both an anchor and a set of wings. My old way of doing things was gone.”